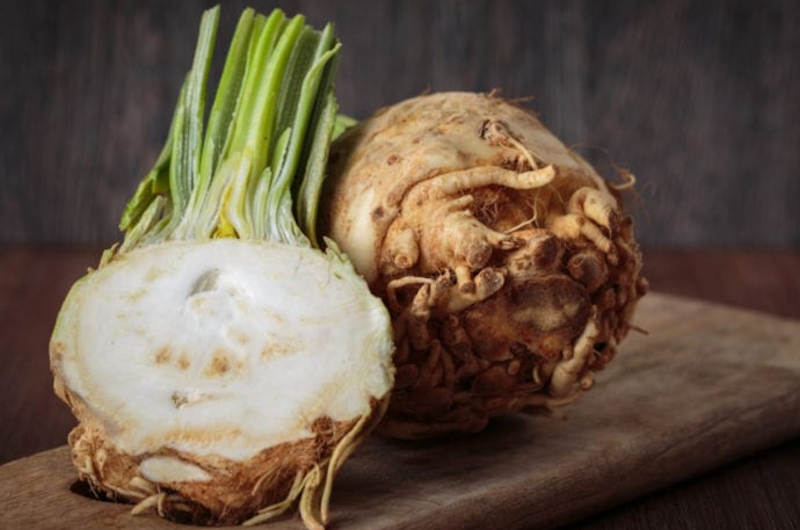 Contrary to popular belief, celery root is not the root of the celery stalks we see in stores.  It is closely related botanically but is bred specifically for the root instead of the stalks.  It has a distinctive taste of celery and parsley with earthy notes and the texture of a not-so-starchy potato.  Looking at it you might think it is difficult to prepare.  But once you cut the ends off and remove the knobby exterior with a vegetable peeler or knife, it’s ready to use in lots of delicious recipes!

What it lacks in looks it makes up for in versatility and flavor.  It can be boiled and mashed, sauteed, roasted.  In other words, it can be cooked in most of the same ways as potatoes, but it is a far healthier alternative.  It is lower in calories, a great source of dietary fiber, vitamin B6, magnesium, potassium and manganese and is a very good source of vitamin C and calcium.  It adds delicious flavor and crunch when added raw to salads.  If using it raw, I suggest tossing it in some acidulated water first to prevent it from turning brown.  Dice it up and add it to soups and stews.  Don’t ignore this strange, gnarly root vegetable in the produce section!  Try this Celery Root and Fennel Soup and I think you will agree, appearances can be seriously overrated!

This soup is creamy, delicious, and super healthy. Celery root has a similar texture to potato but with a mild celery and parsley flavor. Just right for a light soup and sandwich lunch.
Author Rosalie D’Amico