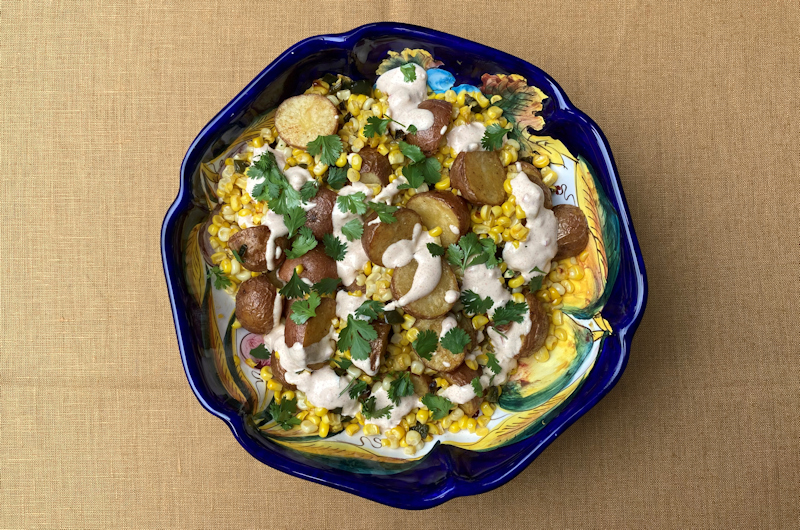 The first of the local corn showed up at the Farmer’s Market last week.  The perfect opportunity to make this recipe, inspired by Esquites, or Mexican street corn.  Adding spicy roasted potatoes to the corn makes it a very hearty salad, perfect as an accompaniment to grilled meats and chicken.  The spicier, the better!  The first time I made this, it was a little too spicy.  Then I toned it down too much and we decided we preferred the spicier version.  Of course, you can make it as spicy as you like by choosing milder chilies or using less.  I have written the recipe using serrano chilies.  They are HOT.  You can replace them with Jalapenos for a milder version.  I also like using the Italian method of roasting the potatoes, which is to boil first and then roast.  This gives them a very creamy, buttery interior.

Inspired by Esquites or Mexican street corn, made with sweet, juicy local corn straight from the Farmer’s Market.
Servings 4 to 6
Author Rosalie D’Amico

The corn can be grilled instead of broiled. To grill the corn, remove the husks and silk. Rub the corn with olive oil and season with salt and Pimenton. Grill, turning often, until cooked and beginning to char. Cool and cut kernels off.